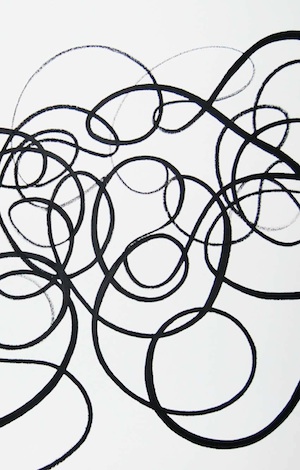 Exhibition opens Saturday June 16th from 1 to 5 pm and runs through to Saturday July 7th, 2012.

TrépanierBaer is honoured to present paintings from the Estate of Richard Halliday (1939-2011). These paintings from Halliday’s Constellation Series, a body of work begun in 2000, represent works from both the critically acclaimed black series and the more recent white series. Varying in size from the monumental to the more intimate, many of these works have not been seen before. Halliday’s large expressive and energenic black and white paintings evolved out of an act of automatic drawing and depict dynamic calligraphic lines that are like physical traces of kinetic energy writ large with paint on canvas.

“In the Constellation Series there is no end and no beginning to the frenzied trajectory of line…Halliday’s oil stick creates lines that are thick or thin, swirling up and around in elegant, overlapping corkscrew designs.  Some of these lines skim lightly across, leaving transparent traces of their passages. Other lines are so opaque that they mark out bold patterns on the surface. The high contrast between black and white, and the spaces constructed by unfurling lines and whorls of varying sizes, create a dynamic spatial depth that is both centrifugal and centripetal…. It is exhilarating to stand in the midst of Halliday’s paintings and glory in their tumultuous energy.” Monique Westra

This exhibition will be the last opportunity to see the works of one of Alberta’s great painters.

Richard Halliday attended the Vancouver School of Art from where he graduated in 1963; he participated in many Emma Lake Workshops, including sessions guided by Clement Greenberg and John Cage.  After attending the Instituto San Miguel Allende, Mexico in the winter of 1964, he began a teaching career in Brandon Manitoba as Director of the Brandon Allied Art Center, from Sept 1964 to May 1966. In the spring of 1966 he received an Emily Carr Foundation Scholarship to continue studies in Art History and Film at Sir George Williams University (Concordia) in Montréal. He received his Bachelor of Fine Art Degree in 1976, and pursued graduate studies for two years at Concordia University.

In 1968 he was appointed Director of the Montréal Museum School of Art and Design, and spent ten years as director of the private art college administered by the Museum. A decade later, he was appointed to the full time teaching faculty of the Alberta College of Art + Design (ACAD). After a few years as assistant head of the college he was appointed department head in 1982. After a teaching career spanning thirty-six years Richard Halliday retired from ACAD in 2002. He was honoured with the designation of Lecturer Emeritus, by the College Faculty at the Graduate Convocation of May 2003.

Richard Halliday was a member of the Royal Canadian Academy and was a founding member of the Artists Circle, Calgary Contemporary Arts Society. His work can be found in numerous collections including: the Canada Council Art Bank, the Alberta Foundation for the Arts, Brandon University, the Canadian Broadcasting Corporation, the Montréal Museum of Fine Arts,  the Calgary Allied Art Foundation, The Nickle Arts Museum, Glenbow Museum, the MacKenzie Art Gallery, and the Canadiana Collection, National Capital Commission, Ottawa to name a few. This exhibition will be the last opportunity to see the works of one of Alberts’a great painters.