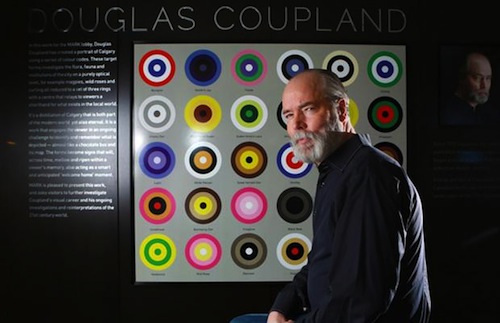 My experience with Calgary, over a long time now, is that it tends to be very grey and brown and when you see colour, it’s like kaboom!   Douglas Coupland

While it may have been privately commissioned, Douglas Coupland did not get a lot of guidance when it came to designing his first large-scale artwork in Alberta.

He had a big blank wall to work with and vague instruction that it be “somehow reflective of Calgary.” He took it from there. “With most walls, they’ll put a fire alarm in the middle of it or do something to wreck it,” said Coupland with a laugh. “So it was really beautiful.”

On Friday, the acclaimed Vancouver-based author and artist revealed his design for Interpretation of Calgary in the 21st Century, a colourful 4.9-metre high by 4.1-metre wide piece that will tower over the lobby of the Mark on 10th condo building being built at 10th Avenue and 8th Street S.W.

Commissioned by developers Qualex-Landmark, the piece represents the 51-year-old’s vision of modern Calgary and is the latest in what is becoming an impressive collection of large-scale urban artworks Coupland has completed across Canada.

Using a target motif, Interpretation of Calgary will consist of 30 steel circles, each one roughly 90 centimetres in diameter and consisting of three coloured rings and a centre. The circles will investigate some form of flora, fauna or recognizable institutions in Cowtown with its colours, whether it be magpies, wild roses, black-eyed Susans, curling or hockey.

My experience with Calgary, over a long time now, is that it tends to be very grey and brown and when you see colour, it’s like kaboom!” said Coupland, who visited Qualex-Landmark’s sales office in the Beltline Friday for the unveiling of a scale model of the condo building and an “artist’s wall” that has been set up to highlight the lobby installation. “I wanted to capture those little kabooms of colour.”

Qualex-Landmark announced the commission in November of last year. Both the art and the Mark 0n 10th building are expected to be finished in fall of 2015.

While the art will be in the lobby of a private building, the open-concept design should make the colourful piece visible to passersby as well.

It’s the latest bold piece of artwork for Coupland, who is perhaps still best known as the author of the groundbreaking 1991 debut novel Generation X.

For the past decade his profile was risen considerably for his large-scale public works, which include his Digital Orca at Vancouver’s Jack Poole Plaza and the Monument to the War of 1812 in Toronto, an intriguing four-metre sculpture of two toy soldiers.

That piece was also commissioned by a condo developer. Those who pay for these type of works tend to take a hands-off approach, leaving Coupland to his own imagination, he says. He likens the differences between gallery works and commissioned projects to the difference between fiction and non-fiction writing.

I make art to be seen in a gallery and I do public work or commissioned work, which is a non-fiction version of art,” he said. “It’s grounded in some aspect of reality, in this case Calgary.”

Parham Mahboubi, vicepresident of marketing for Qualex-Landmark, would not reveal how much the company paid for Coupland’s artwork. But it will be a central focal point in the $100-million project, itself meant to be a focal point of Calgary’s emerging Design District.

“The lobby will have a three-storey atrium, which is where we’ll have Alberta’s first large-scale Coupland piece,” Mahboubi said. “For us, that’s very exciting. To have an artist of this stature creating an art piece for this project is going to really set us apart from anything else that’s been done in Calgary.”

Coupland was an air force brat who was born in West Germany before his family relocated to Vancouver a few years later. But his family roots extend into Alberta. His mother’s side of the family were “preachers and Bible-thumpers” who lived in High River and Lethbridge, he said.

While best known as an award-winning author — his books also include Shampoo Planet and Girlfriend in a Coma — he graduated from the Emily Carr University of Art and Design in 1984 with a focus on sculpture.

“Having art in your environment just reminds you that there’s more to life than doughnuts and commuting and mundane things,” he said.

“I think this piece here is about going through technology to reconnect you to the organic. I guess you don’t know what you have until it’s gone. I do single out the States, because they do seem to have almost contempt for any form of public art. You can feel it in the texture. Something is missing. You’re not sure what it is.”

Image Credit:
Author and artist Douglas Coupland sits in front of a scaled down mural which will be very similar to the one he has been commissioned to complete for the MARK condo project in Calgary’s beltline. Photograph by: Gavin Young, Calgary Herald