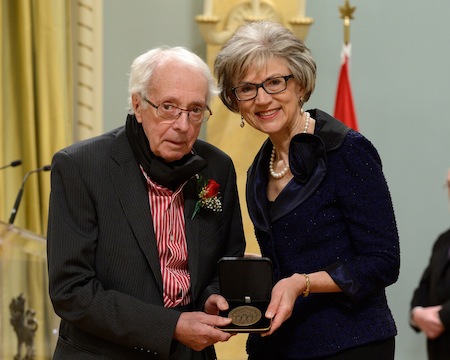 Calgary, March 12, 2013. Today the Canada Council for the Arts announced the recipients of this year’s Governor General’s Awards in Visual and Media Arts, among them Marcel Barbeau.  TrépanierBaer is pleased and honounerd to be hosting an exhibition of Mr. Barbeau’s works alongside works by Christian Eckart titled Marcel Barbeau/Christian Eckart – Selected Works.

A member of the Royal Canadian Academy of Arts and Officer of the Order of Canada (1995), Mr. Barbeau is 88 years old. He was a founding member of Les Automatistes, a catalytic group of Québecois artists credited with literally revolutionizing the art scene in that province in the late 1940s. Along with Paul- Emile Borduas, Jean Paul Riopelle, Pierre Gauvreau, Marcelle Ferron and others he was a signatory to the ground breaking cultural manifesto Refus Global. Marcel Barbeau has been included in every major exhibition featuring the Automatistes since the 1940s. Most recently, his work Nadja (1946) was included in the exhibition Art in War, France 1938-1947, from Picasso to Dubuffet at the Musée d’art moderne de la Ville de Paris. Mr. Barbaeu has lived and worked in Canada, Europe and the United States and was part of the Abstract Expressionist, Op, Minimalist and Kinetic art movements. His work can be found in private and public collections around the world; in Canada his works figure in the collections of the National Gallery of Canada, the Art Gallery of Ontario, Glenbow Museum, Montréal Contemporary Art Museum, and the Vancouver Art Gallery, to name a few.

“Marcel Barbeau personifies the Refus Global in his refusal to be categorized and classified. In order to understand where his work is coming from, we must – like the artist himself, who has travelled and created on several continents – be everywhere and nowhere at once, at the juncture where the refusal to conform allows for absolute freedom of creative expression. Barbeau’s paintings and sculptures, along with the music and dance that have accompanied them, are all dictated by the constant of change. They are attuned to the evolution of culture and society. Highly experimental in its expression, the work of this great artist is a powerful testimony to the necessity and the sheer pleasure of creation. The art of Marcel Barbeau is that of a man in perpetual motion.” Canada Council

Please visit the Canada Council website for more details pertaining to the Governor General’s Awards for Visual and Media Arts and Marcel Barbeau: