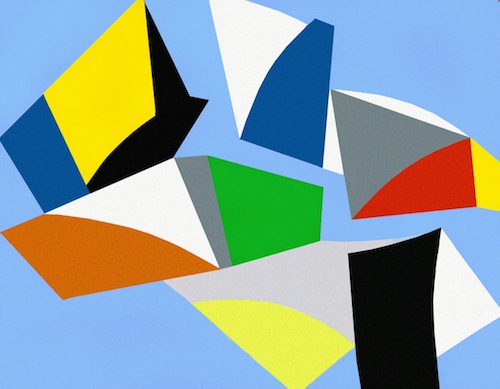 It is with great pleasure that TrépanierBaer announces that Marcel Barbeau is the recipient of this year’s prestigious Prix Paul-Émile-Borduas. This prize – one of thirteen of the Prix du Québec given by the province’s government – is awarded to a person who has created outstanding works in the areas of visual arts, architecture and design.

Earlier this year, Mr. Barbeau was also honoured with the Governor General’s Award in Visual and Media Arts as well the Prix Louis-Philippe-Hébert.

In recognition of Marcel Barbeau’s achievement, Trépanier Baer is featuring a major work titled Diamant, passerelle d’étoiles (Diamond, Gateway to the Stars), 1997. Considered one of the iconic works from that period, this is one of four large-scale works inspired by the same small black, grey and white collages he made in 1990. It is considered by many to be the most accomplished of the four works; it is the most vivid in colour and expresses the most movement.  The painting was produced in his studio in Bagnolet, France while his daughter, Manon Barbeau, the accomplished filmmaker, was shooting the film Les Enfants de Refus global (Children of Le Refus global).

Diamants, passerelle d’etoiles has been exhibited in various public institutions throughout Canada. It was shown most recently the National Gallery of Canada as part of the Governor General’s Awards in Visual and Media Arts celebratory exhibition in the spring of 2013.