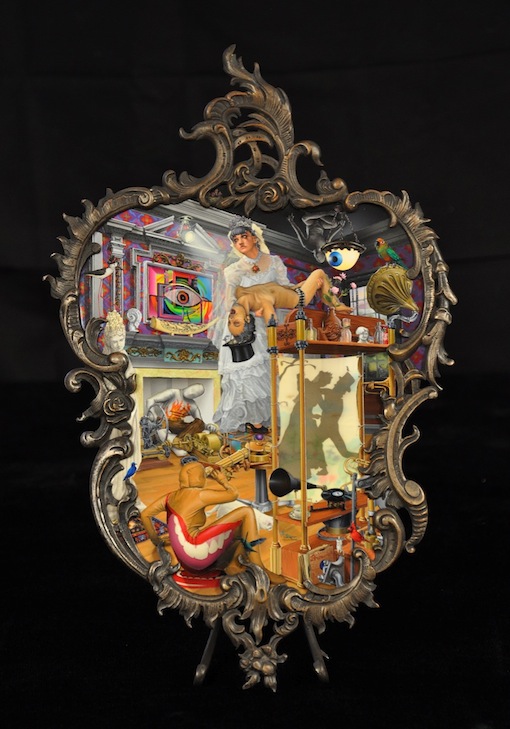 2015: Ron Moppett’s sculptural and installation work will be the subject of a survey curated by Christine Sowiak at The Nickle Arts Museum in early 2015. Primarily known as a painter, this major survey will present three-dimensional works from the 1970s through to the present.

2016: Chris Cran’s work will be the subject of a major survey in 2016. Led by the National Gallery of Canada’s Curator of Contemporary Art, Josée Drouin-Brisebois and working in partnership with both Catherine Crowston, Executive Director of the Art Gallery of Alberta, and Ryan Doherty, Director of the Southern Alberta Art Gallery, the exhibition will present numerous aspects of the artist’s oeuvre over the course of several decades. A catalogue is planned.

Christian Eckart is featured as Artist of the Week on Strombo.com, the website of the Canadian Broadcast Corporation program George Stroumboulopoulos Tonight. Please click here to see the gallery of images from the site.

Michael Smith’s work is featured in Forging a Nation: Canada Goes to War at The Military Museums in Calgary, Alberta. For more information on the exhibition, please click here.

If you are moving around the country and elsewhere over the next several months, herewith is a listing of exhibitions that we recommend you see.

Collages: Gesture and Fragments curated by Lesley Johnstone. The exhibition brings together the work of eight artists who employ techniques of collage (as well as découpage and montage) to very different ends and evoke distinct historical traditions. Luanne Martineau’s recent paper work The Lack of it the Dream is featured in the exhibition along with works by painter David Elliott, Paul Butler, Hajra Waheed and Louis-Philippe Côté, to name a few. The exhibition runs through to April 27.

Peter Doig’s No Foreign Lands at the MMFA is well worth the trip. This exhibition was organized by the MMFA and the National Galleries of Scotland; it is the first major exhibition of Doig’s work in North America. The exhibition is presented in the classical galleries of the MMFA in the Michal and Renata Hornstein Pavilion where Doig, as a young artist, first saw many works that had an early influence on him. This is a singular opportunity to see a selection of major works by Doig. On view until May 4.

Kent Monkman’s exhibition Welcome to the Studio – on view through to June 1, 2014 – is an immersive installation that has at its center a major new painting. Referencing over 30 portraits by William Notman (whose archive is at the museum), Gustave Courbet’s monumental work The Artist’s Studio – A Real Allegory of a Seven Year Phase of My Artistic and Moral Life, and Monkman’s own coterie of characters and ideas, this cleverly presented painting/installation goes beyond the artist’s interest in the relationship of painting and photography, and sheds light on the importance of museum collections and the fragile foundations of historical narratives.

Galerie de l’UQAM presents the solo exhibition Carol Wainio. The Book. Organized and circulated by Carleton University Art Gallery in Ottawa, the exhibition was presented in five locations across Canada. Carol Wainio is specifically interested in the narrative power of images. In this exhibition, she uses illustrated books and fairy tales imagery references to create a dialogue with the current socio-political context. The project, curated by Diana Nemiroff, brings together a body of 15 works made between 2002 and 2010. On view through to February 22.

Opening March 7, 2014 at the National Gallery of Canada is the exhibition Charles Edenshaw, organized by the Vancouver Art Gallery, and curated by Robin K. Wright and Daina Augaitis with Haida advisors James Hart and Robert Davidson. Charles Edenshaw is an exceptional and thoughtful exhibition, the first major survey of works by the iconic Haida artist. The exhibition of 80 objects presents Edenshaw as an individual spirit and singular talent, and goes beyond the notion that he was the major figure in Northwest Coast art through the 19th and early 20th centuries, suggesting that he was one of Canada’s greatest artists.  This is a must-see exhibition. Exhibition closes May 25.

Secret Citadel is the most recent iteration of Graeme Patterson’s unique vision, begun with his 2007 exhibition, Woodrow. Figures of a bison and a cougar represent Patterson and a childhood friend who moved away and embody archetypal male friend figures. The animals are central characters throughout a loose, yet highly complex narrative that is at times dark, melancholy, joyful, and whimsical. A 30-minute animation brings together the scenes in each sculpture, evoking the vulnerabilities of friendship and loneliness, love and loss. On view until May 30.

If you are in Calgary, head to the Glenbow Museum to see Made in Calgary: The 1990, the fourth installment of the Glenbow’s Made in Calgary series. Guest-curated by Nancy Tousley, the exhibition features over 100 works by 55 artists, including Chris Cran, Ron Moppett, Eric Cameron, Luanne Martineau, Martin Bennett, John Will, Mary Scott, David Hoffos and Rita McKeough, to name a few. Organized in partnership with Contemporary Calgary, the exhibition spills into their space located on Stephen Avenue Mall in the former Art Gallery of Calgary located at 117 – 8th Avenue SW. A great way to warm up on a wintery afternoon.The exhibition runs through to May 4.

The Art Gallery of Grande Prairie presents Harold Klunder: This Length of Muddy Road. This is the first survey in western Canada of paintings, watercolours and drawings by Harold Klunder. On view are works from 1962 through 2013, including a new, nine by twelve foot triptych just finished at the end of 2013. The exhibition is on view until April 20.

The Phoenix Museum of Art presents Lifelike, a touring exhibition that includes work by Evan Penny. This group exhibition – organized and curated by the Walker Art Center in Minneapolis – features artists variously using scale, unusual materials, and sly contextual devices to reveal the manner in which their subjects’ authenticity is manufactured. The exhibition runs through to May 18.

Evan Penny’s work will be featured in a touring exhibition titled Visual Deception Ⅱ: Into the Future. The exhibition will be shown at the following venues in Japan beginning in the summer of 2014 through 2015: The Bunkamura Museum of Art; Hyogo Prefectural Museum of Art; and the Nagoya City Art Museum. This exhibition is the sequel to Visual Deception: Trick Art Exhibition held in 2009, which broadly emphasized the historical development of the genre of trompe-l’oeil.  The focus for the second exhbition is the evolution of the techniques of illusion in modern art as it branches out into many different streams.