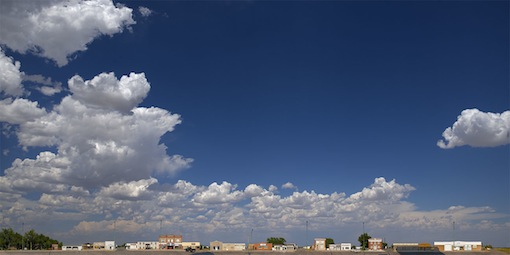 TrépanierBaer cordially invites you to the opening reception of Danny Singer: Welcome to Miss Meagan’s Munchies, an exhibition of new works, including a new video work by the artist.

Working out of the tradition of documentary photography and using contemporary photographic techniques, Singer records places found in Canada’s western Prairie Provinces, and in the Great Plains of North America. Often composed of up to 80 or 100 sequential images digitally conjoined into seamless panoramas, Singer’s photographic works are eloquent, elegiac and nostalgic histories of small towns, villages, and hamlets.

Also on view is a new video piece by Singer, the eponymously titled Welcome to Miss Meagan’s Munchies. As described by the artist:

Set in the typical restaurants and coffee shops that still form the basis of community in many small towns, where men meet for morning coffee and later women meet for lunch and a chat, this video portrays many of the clocks I have seen in such locales. These clocks are often the only advertising available to local businesses; they used to be ubiquitous but like everything else, they have largely been replaced by web sites or in many cases nothing at all.

Danny Singer is a photographer living and working in Vancouver, BC. Born in Edmonton, Alberta, Singer began his career as a cameraman and director for the CBC. In 1970, he moved to Montréal, where he made the transition to still photography. He is the recipient of a Canada Council mid-career grant, a British Columbia Arts Council grant, and the Hamber Foundation Award of Merit. He has exhibited in solo shows across Canada and in numerous group exhibitions such as Shore, Forest and Beyond, Art from the Audain Collection, Vancouver Art Gallery (2011), and Timeland: 2010 Alberta Biennial of Contemporary Art, Art Gallery of Alberta, Edmonton, Alberta (2010). His work can be found in private and public collections across the country including the National Gallery of Canada, the Vancouver Art Gallery, Glenbow Museum in Calgary, and the Mendel Art Gallery in Saskatoon, to name a few.

In 2013, Singer, along with George F. Thompson Publishing, L.L.C, released a survey monograph titled Main Street: Towns, Villages, and Hamlets of the Great Plains. With an essay by Grant Arnold, Audain Curator of British Columbia Art, Vancouver Art Gallery, this 140-page book contains 41 colour photographs, including 10 six-page fold-outs, by Danny Singer. This monograph will be available for purchase at TrépanierBaer.