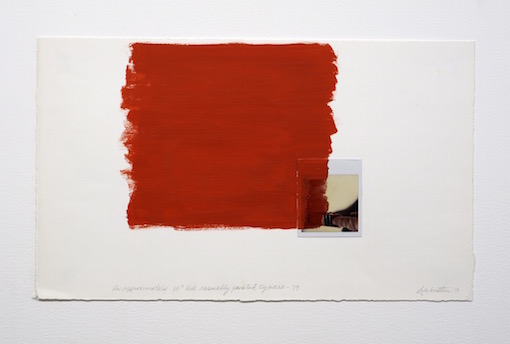 IAIN BAXTER&:
“…Only Photography Is Up To the Task”

You are cordially invited to the opening of:

IAIN BAXTER&
“…Only Photography Is Up to The Task”

IAIN BAXTER& has been described as the founding figure of the Vancouver art scene and one of the pioneers of photo-conceptualism internationally. He is an artist that has radically redefined the role of the artist: integrating photography, installation, sculpture, painting, drawing and performative aspects into his work.*

TrépanierBaer will present a selection of IAIN BAXTER&’s photo works ranging from his earliest experiments with the camera to more recent works, including a limited selection of works from the N.E. Thing Company which BAXTER& founded with his then-partner Ingrid Baxter in 1966. A selection of Polaroids from the Reflections of America and Japan Reflections series will also be exhibited, as well several little-known works that will be presented for the first time.

Photography has been at the heart of this enthusiastic, inquiring conceptual artist’s practice. As Lucy Lippard stated in her essay 3 Minute Photos, IAIN BAXTER&:  “…is endlessly inventive and virtually uncritical, open to the world and its surprises. In fact through BAXTER&’s eyes, almost everything is surprising, and his gift is communicating this sense of wonder, making us see what we weren’t looking for. At times he asks more of Art than Art is prepared to deliver – more perhaps, than we really want to see, but then we get swept up anyhow in the excitement. His medium is multiplicity. Every thing and every place are grist for the mill. For such an expansive aesthetic only photography is truly up to the task.”

IAIN BAXTER&’s work has been exhibited internationally in hundreds of solo and group exhibitions for over fifty years. A member of the Royal Society of Canada, he is the recipient of many awards and distinctions, including four honourary doctorates. He was made an officer of the Order of Canada (2003) and is the recipient of the Governor General’s Award for Visual and Media Arts (2004). IAIN BAXTER& lives in Windsor, Ontario with his spouse Louise Chance BAXTER&.

Please join us the following day, Saturday, October 17 at 2:00 p.m., at the gallery, for a lively and informative discussion of IAIN BAXTER&’s work lead by the well- known art historian and former head of Sotheby’s Canada, David Silcox.

* From the 2012 press release, The Art Gallery of Ontario Celebrates IAIN BAXTER&