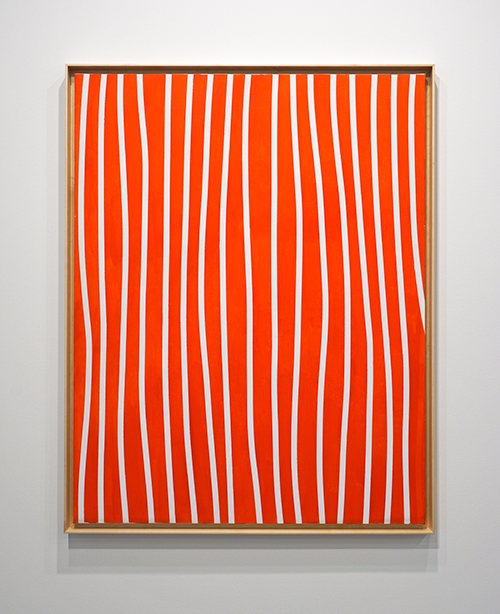 It will be hard to imagine a world without the presence of Marcel Barbeau. Marcel passed away January 2, 2016. His work has been a guiding light since the mid-1940s. We followed his every move as painter, sculptor, photographer and performance artist. He traversed much of the territory of abstract art, as a trailblazer rather than a follower. The youngest member of Les Automatistes, signator to the 1948 Refus Global, Barbeau created some of the most commanding, challenging all-over, tachiste abstractions of the period. For this alone he could be amply celebrated and remembered. Some of us think he made some of the most inventive works of the entire group.

His travels took him to periods of residence in Montréal, California, Vancouver, Paris and back. He was a ceaseless venturer within his art explorations as well. By the mid-1950s he was making monochromes and highly reductivist geometric abstractions so sparse they anticipate minimalism. His stark black-and-white 1950s abstractions can stand beside Pierre Soulages, Franz Kline, Lucio Fontana, and are the confrères of his Montréal contemporaries Fernand Leduc, Fernand Toupin, Claude Tousignant, Guido Molinari, and Paul-Émile Borduas (his teacher 1942-47). By the early 1960s he was making ‘hard-edged’ abstractions and was recognized internationally as a contributor to the Op art movement.

His lifelong work in sculpture and painting jockeys to find a balance between organic free expressionistic flair, geometry and intellectual control. Personally, I think he hit his stride again later in life, by the 1990s he was creating a series of paintings that was a happy conflation of both. Leduc and Toupin would smile; these paintings look back to the forbearers of the Abstraction-Création group of the 1930s, looking every bit in the present tense. No small feat.

TrépanierBaer, Calgary, mounted an insightful pairing in an exhibition of the works of Marcel Barbeau & Christian Eckart (March 13 – April 13, 2013). The references in Barbeau’s works were all to art history: multi-coloured geometric shapes floating on a sky blue background the figure/ground of Matisse cut-outs, Ellsworth Kelly, Fernand Leduc revisited. Not too far in the distance lurked the 1970s works of Jack Bush. Yet they were still new, vital fresh and yes, they were young. They were free, playful, spirited, and like the man himself, they were a bit impish: the rustling of falling leaves, a confetti parade? In his eighties he still had a devilish sparkle in his eyes and still plenty of artistic territory left to explore. He remained working, pushing his work onward. A recent series further unites painterly gesture with restrained geometries and sparse ‘untouched’ expanses.

Late night on the occasion of work I created for Nuit Blanche, Montréal, Marcel took the time to come visit me and see my work; one of my most cherished professional moments.

His work was the subject of a few art films and videos among which renowned film maker Manon Barbeau co-produced with InformAction and the National Film Board of Canada in 2000. In 1963, Barbeau received the Zack Purchase Prize from the Royal Canadian Academy. In 1973, he was given a Lynch-Staunton Foundation Grant by the Canada Council. He was invited to join the Royal Canadian Academy of Arts in 1992, and in 1995, he received the Order of Canada. In 2013 he was awarded a Governor General of Canada Award in Media and Visual Arts; the Prix Louis-Philipe-Hébert, bestowed the by the Société Saint-Jean-Baptiste de Montréal; and the Prix Borduas, the Québec government award in the visual arts. In 2015 he was made an Officer of the National Order of Québec. You can’t leave your stamp upon Canada unless it appears on a stamp: in 1998, Canada Post reproduced one of Barbeau’s works as part of its series in honor of Les Automatistes painters.

His works are in many private and corporate collections as well as 338 + works in public collections in Canada, the United States and in Europe. Among them are: the Art Gallery of Ontario (Toronto), the National Gallery of Canada,  Montréal Museum of Fine Arts, Musée d’art contemporain de Montréal, Musée national des beaux-arts du Québec, Beaverbrook Art Gallery, and practically every major art museum in the country, including in Alberta: Art Gallery of Alberta, Glenbow Museum, Nickle Galleries, and the University of Lethbridge; and abroad at the British Museum (London), the Chrysler Art Gallery (Norfolk, Virginia), the Lyon Museum of Fine Arts (Lyon, France) and the Stedelijk Museum (Amsterdam, Holland), to name a few.

He will be buried on Monday, January 25 at 11:00 am at Notre Dame des Neiges. For further information :

The exhibition of Marcel Barbeau’s work scheduled for
late spring/early summer of this year at TrépanierBaer will go on as planned.