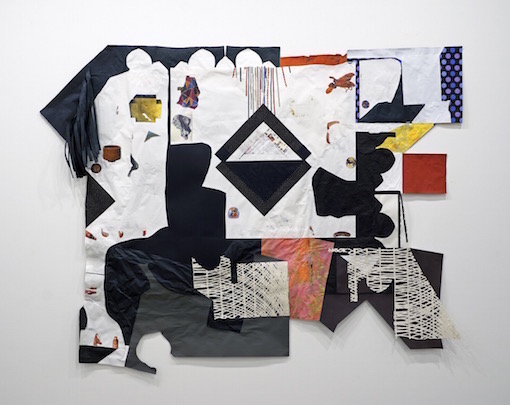 Martineau’s work is like a rivet that holds together new histories.

“Montréal-based Luanne Martineau produces felted wool sculptures, drawings, collages, and recently, large-scale textile-based collage works. Combining various methods of craft with the legacies of 1950s and 1960s contemporary art, Martineau has explored the spaces in between art genres, unsettling the boundaries between style and ideology in her enticing and sensual works. Martineau’s work is like a rivet that holds together new histories. The conversations generated through Martineau’s work bridge genres and movements, such as Abstract Expressionism, Post-minimalism, Feminism, popular culture and craft, making them fluid, porous and relevant to current discourse. In breaking down the barriers between figurative/abstract and art/craft, Martineau’s work unpacks the formal and critical underpinnings of art history and traditional female work while also creating an engagement with this history and its omissions. This exhibition of recent sculpture and collage together resets current conversation about craft and women’s work in the 21st century. ” [Vicky Chainey Gagnon and Karine Di Genova]

Martineau has exhibited across Canada and internationally including at the National Gallery of Canada, Ottawa; the Power Plant, Toronto; and MASS MoCA, North Adams, Massachusetts. Her work was the subject of a solo exhibition titled Luanne Martineau, curated by Lesley Johnstone, at the Musée d’art contemporarin de Montréal in 2010. In the spring of 2014, her work was included in COLLAGES – Gestures and Fragments at the Musée d’art contemporain de Montréal, and in Contemporary Drawings from the National Gallery of Canada at the Mendel Gallery, Saskatoon, Saskatchewan. In 2015, Martineau’s work was the subject of a solo exhibition curated by Vicky Chainey Gagnon and Karine Di Genova at the Foreman Art Gallery, Bishop’s University.  In April of 2016 Martineau will participate in an Artist Residency at the Kinngait Studios in Cape Dorset in April 2016.The TD North/South Artist Exchange, in collaboration with the Canadian Art Foundation, invites artists from southern Canada to live and work in the Arctic for a three-week period and artists from Canada’s Arctic to travel to The South for a similar residency.

Martineau received the VIVA Award for the Visual Arts in 2007, and in 2009 she represented British Columbia for the Sobey Art Award. She was a guest lecturer at the Tate Modern for The Banff Centre and Middlesex University symposium titled Informal Architecture in 2007. Martineau’s work can be found in many prominent public and private collections in Canada including those of the Vancouver Art Gallery, the National Gallery of Canada, Loto Québec, TD Bank Group, the National Bank of Canada, and the Musée d’art contemporain de Montréal, to name a few.

Luanne Martineau was born in Saskatoon, Saskatchewan in 1970.  She studied at the Nova Scotia College of Art and Design before transferring to the Alberta College of Art + Design, where she received her Fine Art Diploma in 1993. She completed her MFA at the University of British Columbia in 1995.  Luanne Martineau lives and works in Montréal, where she is Associate Professor, Painting and Drawing, at Concordia University.