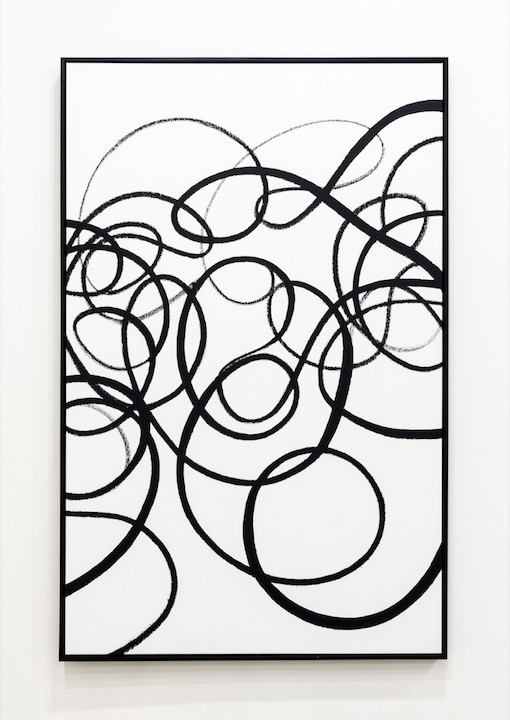 TrépanierBaer is pleased to present a rare and beautiful work by Richard Halliday (1939-2011) titled Constellation # 89, 2010, on view now at the gallery.

In 2012, TrépanierBaer presented an exhibition of the last remaining Constellation Series works by the artist that subsequently sold out. Works from this series seldom come to the market, until now.

Richard Halliday’s first solo exhibition of his explorations of elegant white calligraphic lines on black, oversized canvases occurred in 2000. Known as the Constellation Series, Halliday had revisited this chromatic configuration, sometimes reversing the colour schema ( black curvilinear lines on white canvases), all the while still creating ribbons of lines that appear as weightless celestial curlicues. Halliday drew from the traditions of American Abstract Expressionism and Les Automatistes which both give these works a sense of historical context.

Born in Vancouver in 1939, Richard Halliday attended the Vancouver School of Art where instructors included Jack Shadbolt, Roy Kiyooka, Ron Thom and Peter Aspell, and he participated in many Emma Lake Workshops including sessions guided by Clement Greenberg and John Cage. After attending the Instituto San Miguel Allende in the mid-1960’s, he pursued graduate studies at Concordia University. His works have been included in solo exhibitions in North America and overseas, and figure amongst many private and public collections such as the Glenbow Museum, Calgary; the Mackenzie Art Gallery, Regina; the Montréal Museum of Fine Arts; and the Nickle Arts Museum, Calgary, to name a few.

A member of the Royal Canadian Academy of Art, he held numerous posts at the Alberta College of Art + Design (ACAD) including those of Drawing Program Co-ordinator and Instructor, Assistant Director, and Director, from 1978 to his retirement from the institution in 2002. He passed away in Calgary, Alberta in 2011 at the age of 72.

Don’t miss out on this unique opportunity to see Constellation # 89, 2010, during its limited stay at the gallery!