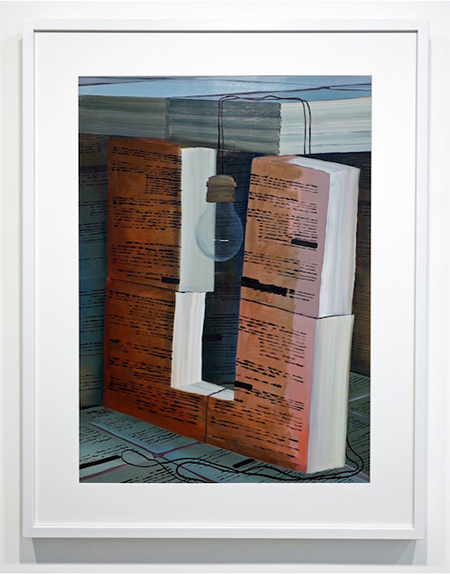 In the Viewing Room – Étienne Zack

Running concurrent with Étienne Zack’s exhibition titled Those lacking imagination take refuge in reality, opening at the Esker Foundation on Friday, May 27, TrépanierBaer is pleased to present a suite of selected recent works by the artist in our Viewing Room beginning today. As with the works featured in the Esker exhibition, those on view at TrépanierBaer also reflect the artist’s interest in the relationship between art and text.

Born in Montréal, Canada in 1976, Zack is a Canadian artist based in Los Angeles. He studied at Emily Carr University of Art + Design in Vancouver, and Concordia University in Montréal. The starting point for many of Zack’s paintings are constructions or installations that he creates in his studio, often from commonplace (in context) materials such as paint tubes, palettes and cigarettes. Conveyed with a raw, sometimes naive style, Zack’s canvases may read as fanciful without coming off as slick or escapist. They also provide a different take on the longstanding genre of “painting about painting,” integrating philosophical commentary on the genre’s history with a grounding in its real, physical materials and settings.

Étienne Zack has had numerous solo exhibitions in Europe and Canada such as: According to This, Bergen Kunsthall, Bergen, Norway; Étienne Zack at the Musée d’art contemporain de Montréal; Thomas Dane Gallery, London, England; Jorge Queiroz/Étienne Zack, Marina-Miranda, Madrid, Spain; Vision Machine, Surrey Art Gallery, Surrey, British Columbia; and Equinox Gallery, Vancouver. He has also been included in numerous group exhibitions of note, including Up The Walls at The Model Museum, Sligo, Ireland; Oh, Canada, MASS MoCA, North Adams, USA; No Place As Home: New Art From Vancouver at Projektraum Viktor Bucher, Vienna, Austria; In a Certain Place at Nicole Klagsbrun, New York; the 2010 Biennial at the National Gallery of Canada titled It Is What It Is, Recent Acquisitions of New Canadian Art, to name a few.

His work can found in numerous institutions and museums including the National Gallery of Canada; the Vancouver Art Gallery; the Montréal Museum of Fine Arts; the Musée d’art contemporain de Montréal; Glenbow Museum; the Zabludowicz Collection, London, England; and The Model Museum, Sligo, Ireland, to name a few. Additionally his work is part of many corporate and private collections in the United States, Europe, and across Canada

Winner of the 2005 Royal Bank of Canada Painting Competition, Étienne Zack is also the recipient of the 2008 City of Montréal’s Pierre-Ayot prize, and the 2014 Emily Award in Vancouver.