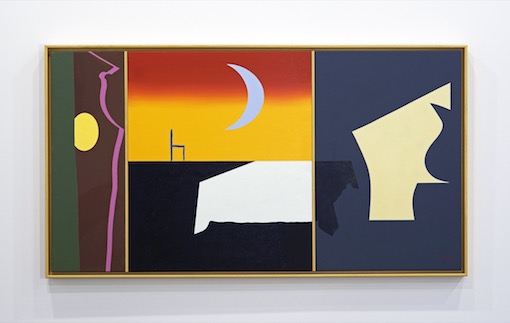 Saturday, October 22, 2016
Opening and ADAC Gallery Hop Talk with
Ron Moppett and Nancy Tousley at 11:45 AM

TrépanierBaer is pleased to present Evey Diamond Dream, an exhibition of new and recent work by Ron Moppett. As the artist has noted about the works in this exhibition:

A continuing theme and subject in my work are the notions of home and away. Interesting that they are widely understood as a sporting terms. The home team is expected to have the advantage. Which speaks to comfort or safety.

In my paintings, home is the studio. Often referenced with the single chair. Away can be another place but usually it is the place of the imagination or dream. I started using the little boy in the box image by coincidence with my wife Katherine teaching Canadian art history at the University of Calgary.  I imagined him to be Tom Thomson. There are a number of 2015/2016 works that either have that picture as a collage element, or enlarged and rendered in oil. I began to realize that it was more of a self portrait. Me coming to Canada as a boy; actually with little more than a box, but entertaining a great adventure.

Moppett is one of Canada’s leading contemporary artists who is often at the forefront of advanced research in the field of visual arts. His career includes a significant number of honours, exhibitions, publications and awards, including numerous Canada Council grants and the prestigious Gershon Iskowitz Prize in 1997.

Several major surveys of his work have been organized, including one by the Walter Phillips Gallery at the Banff Centre in 1982, and another, a travelling exhibition, by Glenbow Museum in Calgary in 1990. Most recently, Ron Moppett’s sculptural and installation work was the subject of a major survey exhibition titled SCULPTUR(AL), curated by Christine Sowiak for the Nickle Galleries that opened in the fall of 2015. Primarily known as a painter, this major survey presented three-dimensional works by the artist from the 1970s through to the present. In the fall of 2016, the Art Gallery of Alberta presented a two-person exhibition with Ron Moppet and his son Damian Moppett, a prominent contemporary artist in his own right, titled Damian Moppett + Ron Moppett (Every Story Has Two Sides). In August of 2017 his work will be included in an exhibition curated by Caterina Pizanias titled Open Horizons: Allyson Glenn, Colleen Heslin and Ronald Moppett, at the Cultural Foundation of Tinos, Tinos, Greece.

***
This exhibition is opening in conjunction with the Gallery Hop event organized by the Art Dealers Association of Canada.

We look forward to seeing you !