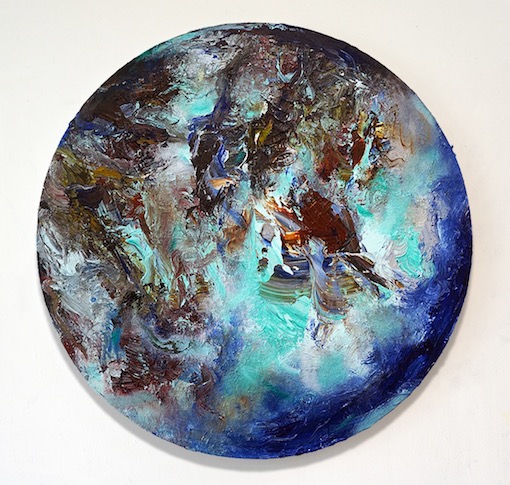 To view works in the exhibition, please click here.

After almost two years of intense research and experimentation, including hundreds of mixed media studies, TrépanierBaer is pleased to announce the release of Michael Smith’s most recent work – 12 spectacular tondi – in an exhibition titled Descry.

With respect to this new body of work, the artist has remarked:

“Contemplating worlds near and afar from above and below: Assembling an array of all things spherical and circular. Crystal spheres, constellation maps and the world in miniature. These objects, images and their associations crystallize in these recent works where the circular format re-directs and re-instructs the language of my paintings. As references to these works I made collages of re-assembled images that form a poetic resource of their beginnings: The Atlas Coelestis (1742) of Johann Gabriel Doppelmayr; Timothy H. O’Sullivan’s photographs of dead Confederate soldiers lying on the battlefield; NASA’s earth images; and Italian 15th and 16th century paintings by known and unknown artists. I have included several prints/watercolours I made from these studies. The paintings are fueled by these studies and by my continued fascination with the elemental forces of nature perpetuating a state of flux and renewal. These tondi both reveal and fold back the substance and material of their making. Light and colour re-emerge as both subject and turning point in a landscape of rich and new associations.” Michael Smith

Michael Smith was born in Derby, England in 1951 and immigrated to Canada in 1978. He obtained a Masters in Fine Arts from Concordia University in 1983. He currently works and lives in Montréal. He has had a solid exhibition history of both solo and group exhibitions in North America and in parts of Europe and Asia, including group exhibitions in Kaohsiung (Taiwan), Prague, Brussels and Berlin. Recent solo exhibitions include Memory Currents (2016) Nicholas Metivier Gallery, Toronto, and New Works (2015) at Art 45, Montréal. Smith’s work was also included in Forging a Nation: Canada Goes to War (2014) at The Military Museums, Calgary. His work is well presented in both private and public collections including the Musée national des beaux-arts du Québec, the Montréal Museum of Fine Arts, Musée d’art contemporain de Montréal, Museum London, and Glenbow Museum, Calgary, to name a few.