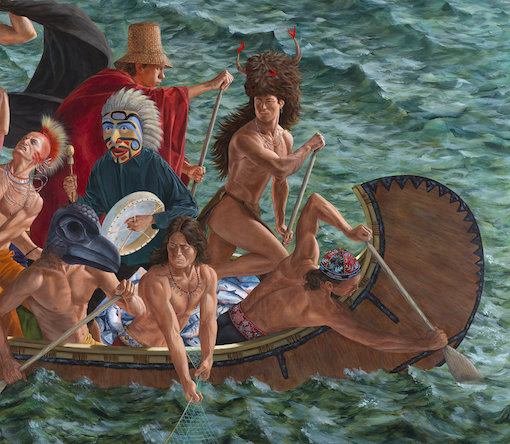 The exhibition is the fruit of the encounter between Kent Monkman, an Indigenous artist of Cree origin, born in Manitoba and based in Toronto, a singular and powerful voice in Canadian art, and the musée des Confluences in Lyon. The artist selected, from the museum collections, ten works and artifacts representative of objects and animals now dispossessed of the powers that Indigenous cultures attributed to them. He makes them the heart of an exhibition that examines the relationship between animals and humans, and invites us to think about the concept of cultural appropriation.

This exhibition was produced by the Canadian Cultural Centre in Paris and organized in partnership with the musée des Confluences in Lyon. It has received the support of Power Corporation of Canada and the Art Museum at the University of Toronto. Kent Monkman received a grant from the Canada Council for the Arts (“New Chapter” programme).

A bilingual publication, co-published by Skira and the Canadian Cultural Centre, accompanies the exhibition.

To read more about the exhibition, please click here.