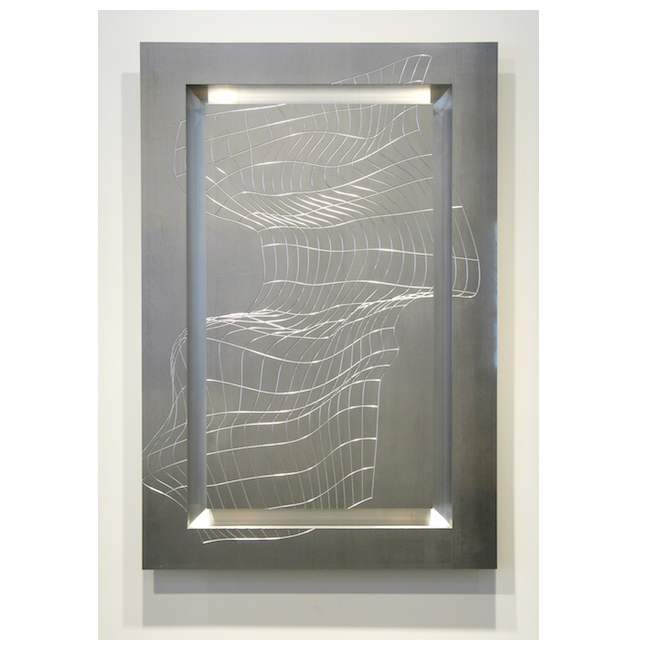 TrépanierBaer is pleased to present  a selection of works by Christian Eckart from the Endless Line Paintings begun in 1995, and The Power-Chord Cycle, a set of  six acquatints with spit bite and softground, printed on Rives BFK paper by Brenda Zlamany, and published by Edition Deger, Sag Harbor, New York in 1993.

Christian Eckart is an internationally acclaimed abstract painter and sculptor. His use of traditional and contemporary materials such as aluminum, lacquer paint, gold and silver leaf imbue his works with an extraordinary material presence that draws the viewer into a state of contemplation beyond the casual gaze. Eckart’s explorations are founded in an interrogation of various tropes of 20th century abstraction, while attempting to delve into underlying imperatives that have persevered in certain types of art making since the Renaissance, including a need to address the ineffable and un-representable. His latest works have a luminescent and liquid futuristic quality to them.

In addition to works produced for interior and sometimes intimate settings, Eckart has translated his practice to a monumental scale, and has won and successfully completed numerous large-scale projects within the past decade. Recent installations include: a sculpture/mobile consisting of three large scale mirror polished stainless steel rings for an atrium at 805 – 3 Avenue in Manhattan, New York for the Cohen Brothers Reality Group in 2009; and a wall mounted triptych titled Hatrick made of 1,500 hand-made components including 140 triangular shaped laminated dichroic glass pieces mounted on a steel and extruded aluminum frame, each component measuring 20 feet by 20 feet by 2.10. The overall dimension is approximately 1,200 square feet. Hat Trick was installed in Calgary’s Centennial Place in 2013. In 2015, Eckart unveiled a new wall-mounted commission titled Cloud Room Field for the William P. Hobby Airport in Houston, Texas.

Born in Calgary, Canada in 1959, he now resides in Houston, Texas. He graduated from the Alberta College of Art and Design in 1984, and completed his MFA from Hunter College, CUNY, New York in 1986. Since graduation, Eckart has participated in nearly 200 hundred solo and group exhibitions worldwide.  Christian Eckart’s work is represented in many important private and public permanent collections including those of The Guggenheim Museum, N.Y.; The Museum of Modern Art, N.Y.; The New York Public Library; The Art Institute of Chicago; The Detroit Institute of Arts; The Museum of Fine Art, Houston, Texas; Museum Moderner Kunst, Vienna, Austria; Musée d’Art Contemporain, Grenoble, France; The National Gallery of Australia; the SCHAUWERK in Sindelfingen, Germany; and The Eli Broad and Eli Broad Family Foundations, Santa Monica, California, as well as many others throughout North America, Europe and Asia.