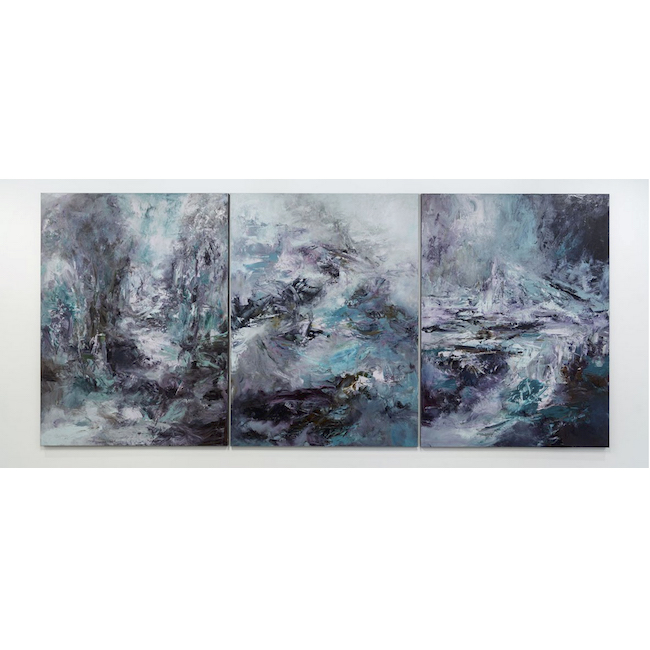 Barren landscapes, treacherous seas and passages filled with light create a stage for the imagination to wander.

His exhibition, Illusion Horizon, on view at the TrépanierBaer Gallery in Calgary until Sept. 28, is a place where sea, sky and land melt into abstract layers of light and fluid impasto surfaces.

The imagery Smith calls forth can evoke feelings of anxiety and awe, all riddled in shadow and light. Although his paintings can be seen as essentially abstract, figurative elements emerge from jagged and stormy backdrops, conjuring a sense of place.

Mixed hues of blues, greens and purples are awash in soft yellows, pinks and oranges that effortlessly evoke the luminosity of J.M.W. Turner and the impasto surfaces of Jean-Paul Riopelle.

These imagined places, a blurry memory of paint pushed, smeared, diluted and blended, create an immersive experience of barren landscapes, treacherous seas and passages filled with light – a stage on which viewers can let their imaginations wander.

Central to the exhibition is Le Passage, a towering triptych of memory, reflection and imagination that represents Smith’s 1978 transatlantic journey from Britain, where he was born in 1951. He settled in Montreal and completed his MFA at Concordia University.

Each panel of this immense mémoire offers a unique passage to some mysterious place. The left panel references classic British landscape, Smith’s past, revealed in a suite of watercolour studies that accompany the painting. The central panel contains maritime images, including waves and a ship, while the final panel veers north towards the Arctic.

Flanking this work are several circular paintings, which are something to behold. Majestic yet ethereal, they evoke the first photographs of Earth from space. When astronauts see the planet from afar, they often describe a cognitive shift in awareness. This state of mental clarity, called the “overview effect,” leaves them completely awed by the fragility of life.

Rescue, almost seven feet in diameter, is an uncanny evocation of this understanding through a world in constant flux. Churning and whirling, it dwarfs viewers, holding them in a fragile and illusive grip. Opposite this work is Magnetic North, equally powerful, but stark and much colder. While the first work shimmers with warmth, the other thunders, as if under the frozen weight of a rumbling glacier.

Other paintings complement these larger works, offering glimpses into possible intentions and meanings. Five works from Smith’s Compass series, for instance, have distinct horizon lines, places where the known and the unknown meet. A compass doesn’t tell you where to go. It just sends you in a general direction – even if that direction seems elusive. Similarly, each painting is not a specific location but a mood or sensation, whether unfettered waves, crushing ice or brooding storms.

While Smith’s paintings seem more like lyrical improvisations than renderings of specific destinations, the longer one looks, the more real his darkling perspectives become. Painted from low angles, they invite viewers to take on perilous terrain as a means to enter the light. Sea, sky and land migrate across his surfaces, creating palpable places filled with power, insight and glorious, melting colour.

Michael Smith: Illusion Horizon is on view from Sept. 7 to Sept. 28, 2019 at the TrépanierBaer Gallery in Calgary.