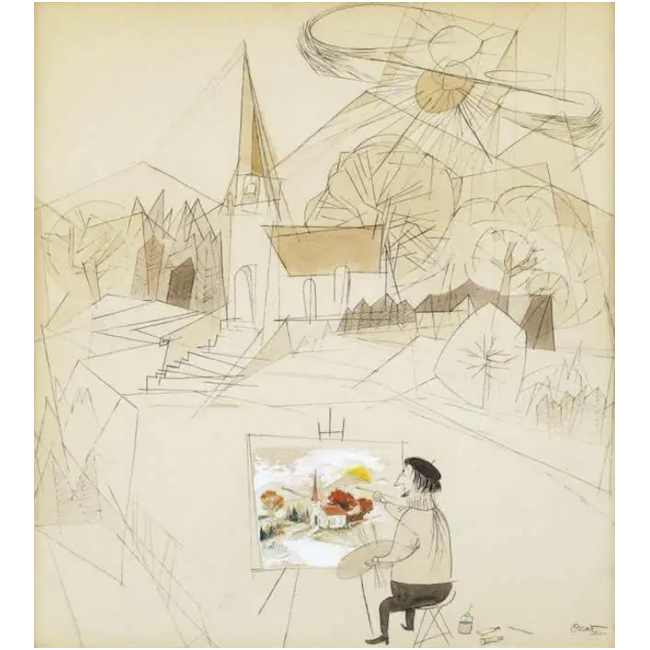 The second life of Oscar Cahén: New exhibit at TrépanierBaer puts spotlight back on abstract painter

Canadian painter and illustrator Oscar Cahén’s life could be the plot of a Hollywood movie.

Born in Denmark in 1916, his father’s career as a journalist took him across Europe in his youth. His father’s second life as an anti-Nazi activist forced the family to split — Fritz Max Cahén, his father, went to the United States, and Oscar and his mother Eugenie fled to England prior to the outbreak of the Second World War. There, Oscar was considered an enemy alien, separated from his mother and shipped to live in a Canadian internment camp in Sherbrooke, Que. in 1940. His art provided an escape: Montreal magazine The Standard liked his work as an illustrator, and the job secured his release from the interment camp in 1942. He then began a career as an illustrator for major Canadian magazines of the era — Maclean’s, Chatelaine, New Liberty — while nourishing a secondary career as a painter, first figurative and then abstract. His life was tragically cut short in a car accident in 1956, and his work largely disappeared from public view.

Over the last 15 years, Oscar’s son Michael has been working to bring the artist back into the public’s imagination and secure his legacy as one of the influential artists of his era. TrépanierBaer is presenting a comprehensive look at the artist’s work from 1948 to his death in 1956, including pieces that were released posthumously.

TrépanierBaer gallery co-founder Yves Trépanier has long been a fan of Oscar’s work, dating back to his time in high school in Toronto, when he saw some of it at the Art Gallery of Ontario. The Cahén Archives approached the Calgary gallery about representing the artist. Most of Oscar’s work was in storage after his death, and it wasn’t until Michael returned to Canada after a career in London, U.K. as an investment banker that he began the process of bringing them back to light.

“He went into storage, took the work out, hired the best restorers and conservators in the country,” says Trépanier. “He had them looked at, documented, cleaned, restored, framed, and then hired people like Jeffrey Spalding, who was one of the early researchers on the Cahén Archives project.”