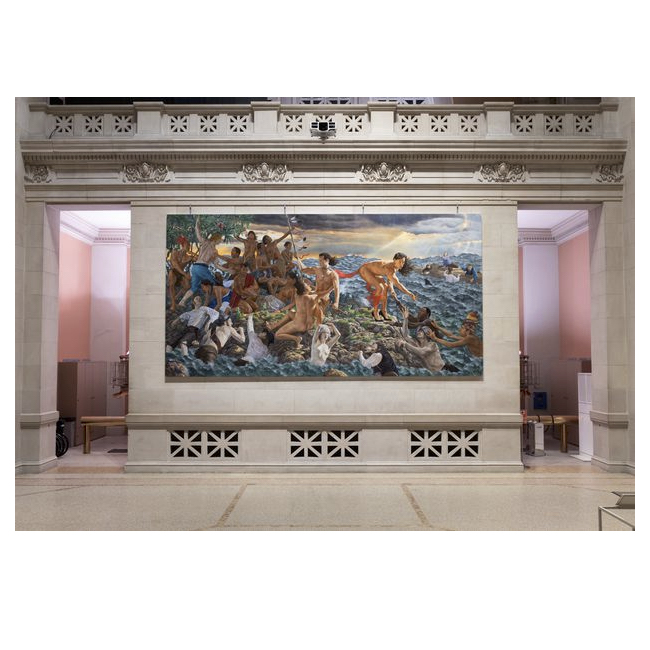 The Cree artist Kent Monkman stood under the soaring ceiling of the Metropolitan Museum of Art’s Great Hall this week wielding a laser pointer. With its beam, he indicated historical characters on the huge canvas behind him, stopping briefly on the figure of a beaver with an olive branch in its mouth as he decoded his latest painting for the assembled media. Europeans came to this continent seeking beaver pelts, he reminded them.

Toronto-resident Monkman, a member of Manitoba’s Fisher River Band, is one of a trio of international artists given an unusual assignment by America’s pre-eminent museum: The Met has asked them to address its encyclopedic collection by creating new art for its most prominent spaces. So, in the museum’s vast but always bustling front hall, Monkman takes the bull by the horns with a pair of canvases that cleverly appropriate Western history painting to expose romantic myths about Indigenous people. He is asking the Met and its many visitors to confront North America’s murderous colonial history – as Canada tries exporting Indigenous perspectives and the hope of reconciliation to the United States.

Borrowing the heroic poses and dramatic expressions from history paintings in the Met’s collection, Monkman calls his project mistikosiwak (Wooden Boat People), extending the Cree word for the French to include, by implication, all European settlers. The work is a diptych, depicting the arrival of Europeans in North America on the left and the resilience of contemporary Indigenous culture on the right. The first painting features a group of shipwrecked Europeans clambering onto a rocky shore where Indigenous characters variously welcome or repulse them. The second shows a boat paddled by contemporary Indigenous figures while two African-Americans pull white people from the water as though rescuing migrants from the Mediterranean. On a rock in the distance, armed men flash the white-power symbol and wave their guns.

These paintings, created by a team of 10 painters under Monkman’s direction and based on photo shoots that employed about 40 models and actors, represent the artist’s increasingly sophisticated deployment of a revisionist history painting. As he resurrects the genre once considered the pinnacle of Western art before it was displaced by modernism, he exposes 19th-century history painting’s assumptions about North America as an empty continent ready for exploitation and Indigenous people as a noble but tragically disappearing breed.

To read the entire article, please  click here or open the PDF listed below.