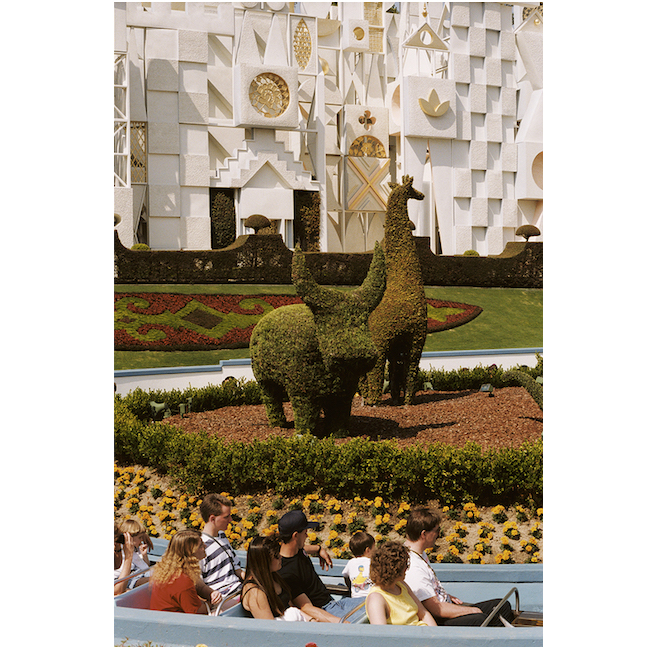 In the artist’s first museum survey at the Vancouver Art Gallery, appropriated advertising imagery exposes the hermetic loops of capitalism.

Many of the more than 80 works on display feature images of nature taken from commercial advertisements. Some employ the art-historically loaded format of the triptych: in Portage Glacier (1982/2017), for instance, a fashion model casts her gaze down demurely, her skin illuminated by the blue tinge of the ice formations flanking her portrait. In Yosemite (1982/2017), a model with windswept hair wearing a fur-lined leather coat appears to pose triumphantly atop a rocky precipice, in the tradition of Romantic painting. Resembling three-panelled altarpieces with female icons at their centre, these works satirize the quasi-religious devotion of consumerism. The model’s unavoidable presence in the centre of the image recalls Portage Glacier and Yosemite’s popularity as ecotourism destinations, reinforcing an anthropocentric view of nature as laden with commercial value.

If Alexander’s appropriations of landscapes – not unlike those seen in calendars or desktop wallpapers – court accusations of kitsch, they do so to parody the false promise that, by consuming more, individuals might be able to renounce capitalism. This paradox appears in stark relief in the series ‘Disneyland, Anaheim, California’ (1992), photographs depicting amusement park visitors wandering through a topiary maze and cruising on a boat through geometric garden plots neatly separated by shape and colour. Such artificial idylls offer brief, illusory escape in exchange for a fee.

Similarly, in Model Suite: Overview (2005), Alexander has taken a photograph of a condominium display room promising future tenants scenic views. The model feigns spaciousness with its slightly miniaturized furniture, made apparent by a bowl of oranges of extraordinary size. Completing the scene are fake lightbox windows displaying digitally-rendered views of the Vancouver skyline from the unbuilt condominium. As Vancouver continues to build its way skywards, views of nature remain a crucial selling point for luxury developments, despite the environmental degradation they cause. Alexander has lived in the city for over 20 years, coinciding with its development boom: in this context, illusions of ‘extreme beauty’ have papered over on-going gentrification and displacement.

he advertising industry traffics in simulacra, fantasy images that appear more real than they actually are. Alexander’s use of natural landscapes exposes these fantasies of escape as ploys to make us spend more. In the midst of climate catastrophe, such a wakeup call is long overdue.