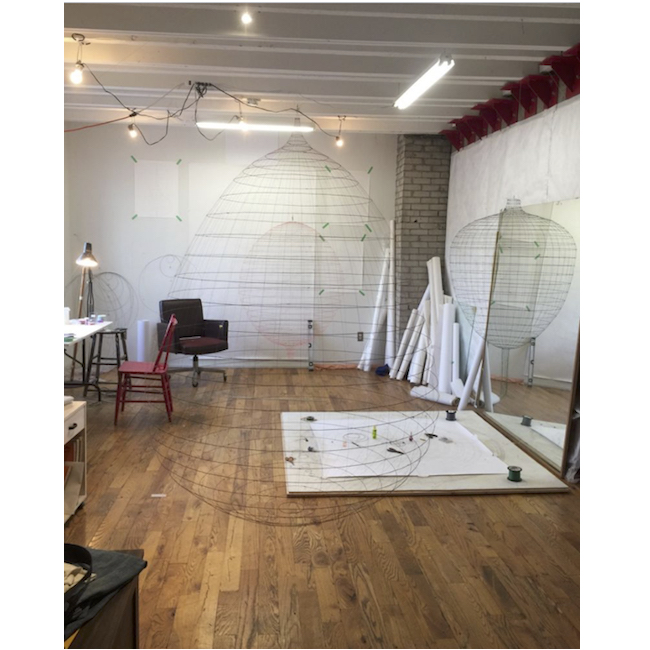 As described by the artist:

These older pieces concern themselves with the concepts of containment and transparency; a volume of space is defined and enclosed within a grid-like wire ‘skeleton’, visible through a skin of sheer fabric. They are wall-mounted and are reminiscent of parts of the human body or clothing.

The current works also rely on a grid of rigid and flexible lines to create voluminous but insubstantial objects. The surface contours of these symmetrical shapes are mapped by thread and wire elements so that they resemble three-dimensional drawings. Suspended from the ceiling, the force of gravity opens them up to form fragile cages full of emptiness.

For over thirty years, Stevenson’s sculptures have challenged the genre’s weighted and static nature through her use of wire, thread and translucent fabrics. Her sculptures, meant to be viewed in the round, appear to be gossamer cages that demarcate both positive and negative space. These vessels begin as drawings, with forms mapped on paper in a constellation of lines which then, in turn, become blueprints for the sculpture. Like drawing in air, wire and thread are arranged into bilateral and almost symmetrical forms. Once realized and installed, the sculptures themselves act as a constant for the shifting dialogue between containment and transparency, and how one object can present both features simultaneously. *

We look forward to seeing you at this pre-spring engagement at TrépanierBaer!

Sarah Stevenson was born in Worthing, England. She grew up in Canada and currently lives and works in Montréal. She received a BFA from the University of Victoria in 1984. Stevenson’s work has been exhibited at various institutions in Canada, the United States, and South America. In 2021, her works will be presented in a solo exhibition at the Darling Fonderie in Montréal, and she was recently the subject of a solo exhibition at the Esker Foundation, Calgary, titled Sarah Stevenson: Nothing Hidden (2018) curated by Naomi Potter. Other exhibitions of note have been held at : Galerie René Blouin, Montréal (2017); Musée national des beaux-arts du Québec, Québec City (2010); Musée d’art contemporain de Montréal (2002); and the Southern Alberta Art Gallery (1999). Her work is included in public and private collections, including the Canada Council Art Bank, La Caisse de dépôt, the Crédit Lyonnais Canada, and the Collection Lambert en Avignon, France.

A PDF version of this announcement is listed below.