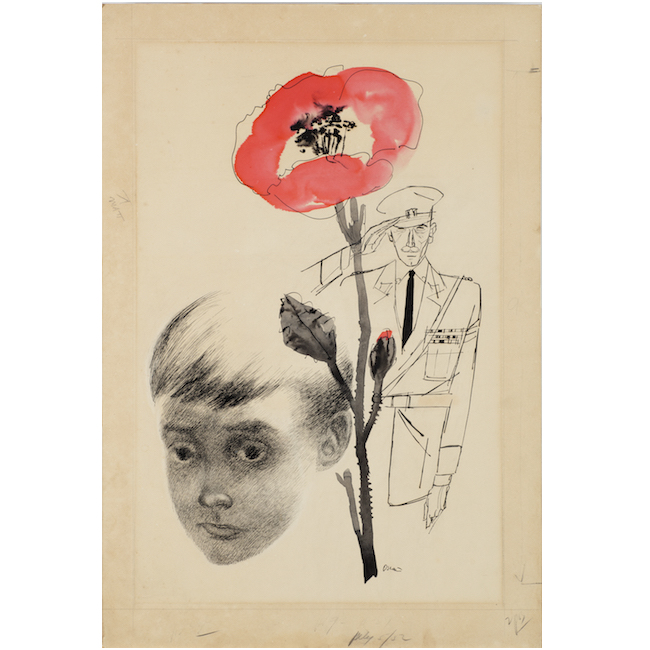 Remembrance Day was first observed in 1919 throughout the British Commonwealth. It was originally called “Armistice Day” to commemorate armistice agreement that ended the First World War on Monday, November 11, 1918, at 11 a.m.—on the eleventh hour of the eleventh day of the eleventh month.

The poppy is the enduring symbol of Remembrance Day. These flowers were in abundance on the Western Front where many battles were fought during the First World War. Poppies are referenced in the opening lines of the World War I poem In Flanders Fields, where they grew among the graves of war victims near Ypres, Belgium.  The poem was written by Canadian physician John McCrae on 3 May 1915 after witnessing the death of his friend and fellow soldier the day before. To read the entire poem, please see below.

The July 5, 1952 edition of the Canadian Weekend Picture Magazine published the short story titled A Hero Comes Home by Morris Cooper, with a beautiful and sorrowful illustration made by Oscar Cahén where the poppy figures again. The illustration is shown above; to  read the entire short story, please open the PDF listed below.

In Flanders fields the poppies blow

Between the crosses, row on row,

That mark our place; and in the sky

Scarce heard amid the guns below.

We are the Dead. Short days ago

Loved and were loved, and now we lie,

Take up our quarrel with the foe:

To you from failing hands we throw

The torch; be yours to hold it high.

If ye break faith with us who die

We shall not sleep, though poppies grow