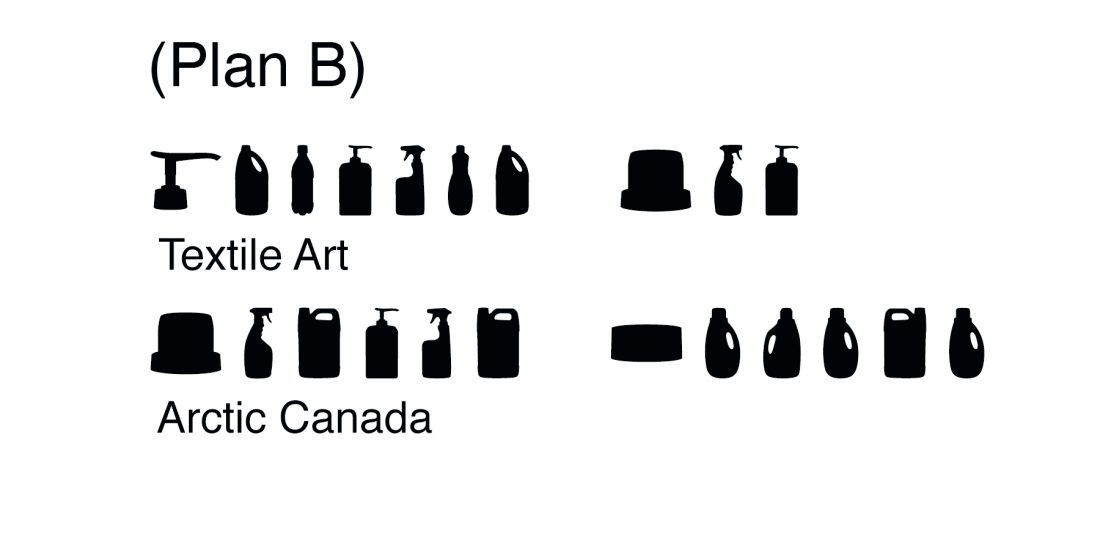 In traditional life, women had to be experts at stitching because survival in the Arctic depended on warm, adaptable clothing. Beautifully stitched skin clothing was a source of pride and often, decorative patterns were made by insets of lighter and darker parts of the seal or caribou skin. Patterns and techniques were passed down from generation to generation. As trade increased in the later nineteenth-century, Inuit seamstresses began to replace skin with imported cloth for the inner parka. They also began to decorate with beads, coins and even spoons.

The social and economic changes which took place in the Arctic from the 1950s on resulted in many Inuit leaving their traditional camps and moving to permanent settlements. To ease the transition to a cash economy, art advisors travelled to many of the communities to encourage the making of arts and crafts for sale, including skin purses decorated with skin patterning.The art of larger scale textiles developed in Qamani’tuaq (Baker Lake), an inland settlement west of Hudson Bay, in the 1960s. Commercial materials including duffel, embroidery floss and felt allowed for the creation of larger wall hangings. The most common technique involved the application of felt cut- outs on duffel, which were then enlivened by fine embroidery. Some artists created abstract designs but most made references to traditional life. Artists are still making wall hangings in Qamani’tuaq and nearby settlements today.This piece incorporates the characteristic technique found in wall hangings from Qamani’tuaq: felt cut- outs of animals and humans stitched onto duffel then enhanced with elaborate embroidery. Each artist has a distinctive style – some use more embroidery and cover the entire surface, such as is found in Elizabeth Angrnaqquaq Qiayuq’s piece. Others, such as Irene Avaalaaqiaq Tiktaalaaq, rely more on the patterns created by alternating coloured felt to define their composition. Joy Hallauk is one of the few artists who used tanned skin instead of felt, enlivened by beadwork and faces carved from antler. The artists are not limited in scale or shape as they cut out the duffel as they wish.

Hallauk began carving in the mid-60s and has cited Arviat carver John Attok as her teacher. Her preferred subjects were people, often mother and children. Also an avid seamstress, Hallauk enjoyed the creative freedom associated with creating wall hangings, and would also make traditional clothing from skins and duffle.

Celebration by Joy Hallauk
Hallauk is known as a sculptor, though did state that she enjoyed the freedom of making wall hangings. In this case, she has incorporated beads, caribou antler and tanned caribou skin in the piece. This combination of materials adds both texture and a three-dimensional feeling which help to underline the subject of a joyful celebration or dance. 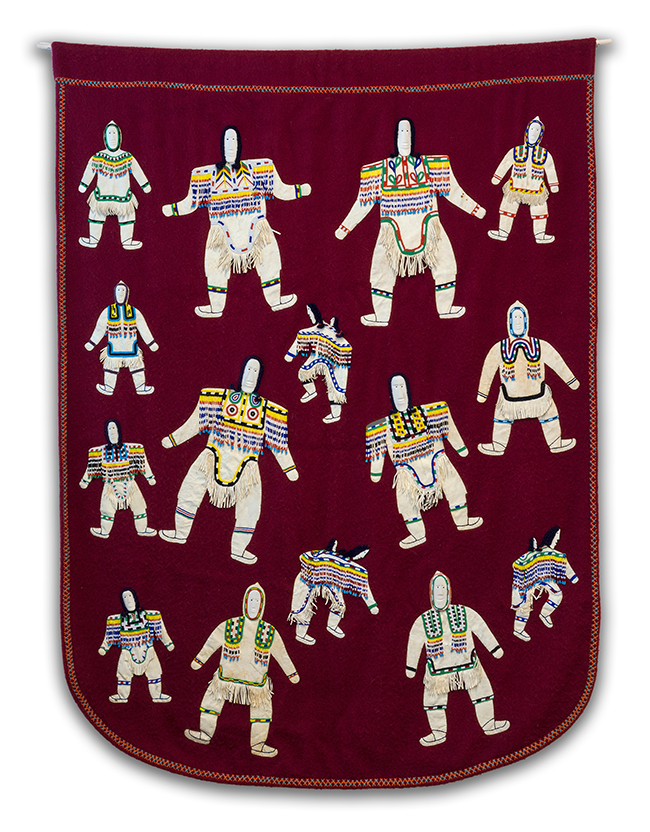 Recognized for her wall hangings and original drawings, Avaalaaqiaq is also known for her prints, which have appeared in the Baker Lake graphic collections from its earliest years. Her work typically depicts stories and legends heard from her grandmother when she was younger.

“Avaalaaqiaq’s style is bold and colorful, much like the artist herself. Her subject matter tends always to be shamanic in origin and is based on the Inuit myths, legends, and beliefs of traditional times as told to her by her grandmother. The shamanic belief system practiced in traditional times called for an easy interplay between man and animals. Avaalaaqiaq’s hybrid, flowing figures aptly portray this harmonious relationship–the forms are fluid and flat–half human, half animal; their heads are often in profile or duplicate halves, with staring eyes and gaping mouths. Her unique figures are readily recognizable. Avaalaaqiaq often sews a border around her imagery, perhaps to contain its unworldly content.”
Marie Bouchard, In “North American Women Artists of the Twentieth Century: A Biographical Dictionary” 1995.

Composition (Birds and Faces) by Irene Avaalaaqiaq Tiktaalaaq
Avaalaaqiaq is among the last of the generation that were creating textiles as early as the 1970s. This piece is typical of her work, featuring transforming birds in the center. The border of creatures is also found in many of her works. The artist has said that these represent the spirits seen while walking on the tundra. There are twelve faces and twelve spirits, so perhaps this is also a reference to a transformation. 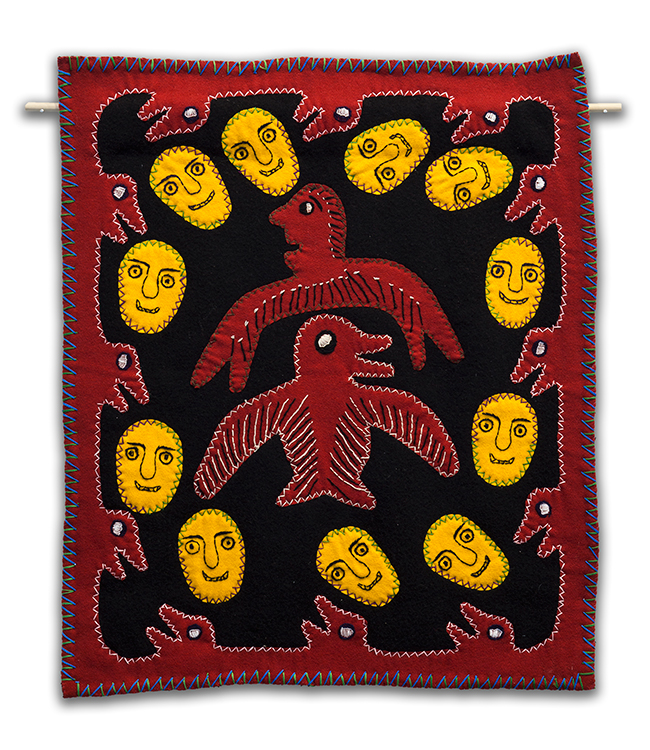 Known for her textile and tapestry work,  Veronica Manilak’s practice spreads over the span of 45 plus years. Many pieces often adopt the shape of a drying seal skin. She’s an active member of the Rankin Inlet elders traditional drum dance group which helps to keep traditional Inuit songs alive.  So recognized is her work that she was asked to make parkas  for Princess Anne, Prince Charles and Queen Elizabeth II, as well as a bed spread and pillow case for Her Majesty presented during the Royal Visit in 1994. In 2013, she was awarded a Diamond Jubilee medal for her contributions to art and culture.

Surrounded by Fish by Veronica Manilak
Manilak is from Rankin Inlet, another community close to Qamani’tuaq but on the coast rather than inland. In Rankin, seal would traditionally have been, and continue to be, a source of food and clothing. This is typical of many of the artist’s works in that she has cut the duffel into the shape of a stretched seal skin – a common site even today. The integrated composition and fine details reflect her style. 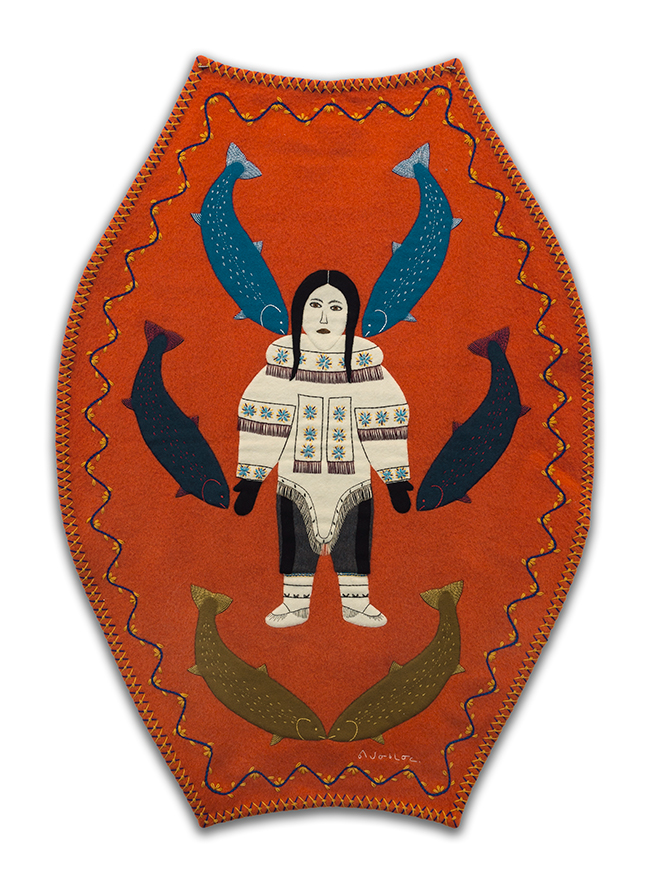 Angrnaqquaq was born in the Garry Lake area and lived off the land until moving to Baker Lake in the late 1950s. She was one of the first women to create a fur and appliqué images on cloth. She often uses the feather stitch, covering her fur like effect. Her work has been shown in three solo exhibitions and a number of group exhibitions since 1976. Angrnaqquaq is represented in the collections of the National Gallery of Canada, the Canadian Museum of Civilization, the Winnipeg Art Gallery, and the Dennos Museum Centre in Michigan, among others.

Our Animals by Elizabeth Angrnaqquaq Qiayuq
This is a hanging in which the artist has fully covered the applique with embroidery floss, making the image more lively and three dimensional. The four fox are surrounding a fox trap, surrounded by bears, wolves and seals. It is a celebration of animals in the Arctic. 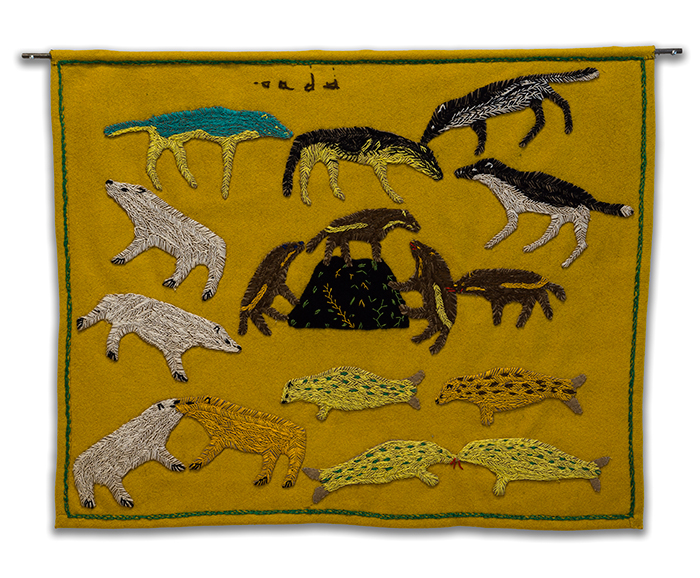