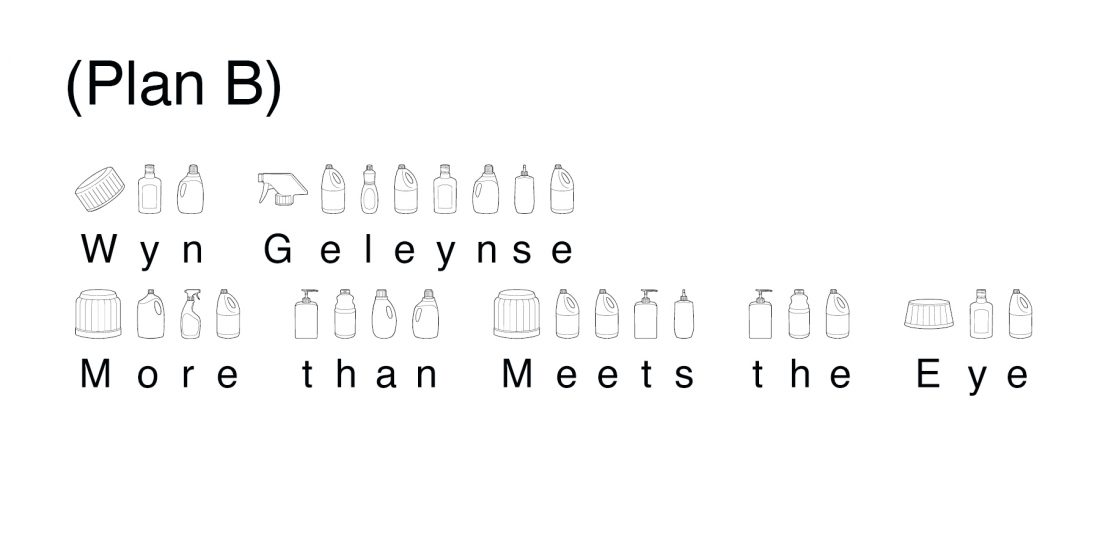 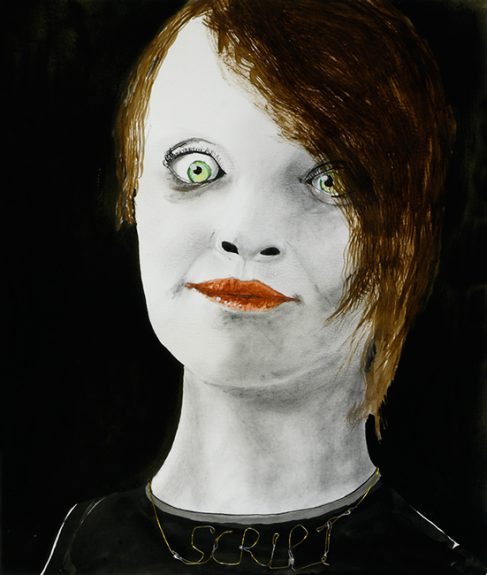 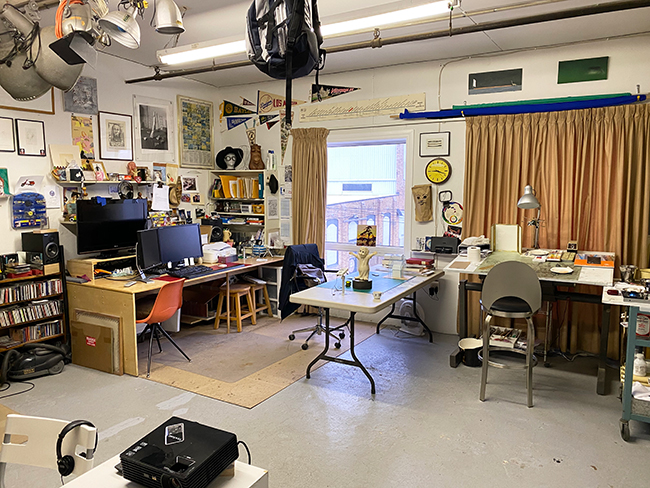 Wyn Geleynse is considered a pioneer in multimedia artistic practices in Canada, with a career in film and video spanning nearly three decades.  He emigrated from Rotterdam to London, ON, with his parents in 1953.  Growing up in London at a time when the so-called “London regional school” was burgeoning – a vernacular art movement that thrived in the city through the 1970s and 1980s – had a direct impact on Geleynse’s development as an artist, who cites London-based artists Greg Curnoe (deceased) and Murray Favro as major influences.  Geleynse’s first artistic efforts were in printmaking, then painting; he studied lithography under Helmut Becker in 1972.  In 1979, Geleynse embarked on an entirely new artistic direction which combined an interest in 3D model-making with the 2D qualities of photography.  Since 1981, the artist has been integrating film into this process, creating installation-based works in which short films loops have been projected against a host of fabricated items: a large-scale model airplane, bedroom furniture, framed photographs, and other elements emblematic of various themes including childhood, domesticity, selfhood, and the boundaries between public and private.  Of late, the artist’s multimedia practice has begun using digital editing techniques, and it has always applied the invention of custom film loopers, viewfinders and other objects to mediate the viewer’s reception of the image.  Geleynse often uses biographical footage and source materials from childhood, references that conjure the psychological spaces of memory – real and imagined, collective and individual – and play off the nostalgic response that is often associated with photographs and films, especially those of family and friends.  As his projections adapts to their personal and intimate surroundings, Geleynse’s works subvert a straightforward reception of the filmic image, forcing reconciliation with the existential power of cinematic conventions in ‘framing’ the boundaries of subjective experience.

Wyn Geleynse is a 2018 winner of the Governor General’s Awards in Visual and Media Arts.

Chuck Scott is a Canadian filmmaker, collector, philanthropist,  and friend of Wyn Geleynes’. He was the Chair of the Board of the Peel Regional Heritage Complex in 2009 when the piece More than Meets the Eye was commissioned by the gallery  and installed.  Below is Mr. Scott’s memory of the commissioning and installation of the piece.

In the fall of 2008 the world suffered a financial crash unlike anything since the depression of 1929. The funny thing was it presented an opportunity for the Peel Heritage Complex to expand into a heritage courthouse and a 1958 modernist building that had been used as offices up until that time. The planning went ahead and the housing department moved out in the fall of 2009.

It was perfect timing for the penultimate show in the gallery.   The Wyn Geleynse exhibition “Day in Day out with Minor Tragedies” was a survey of his work. We also had the use of the 1958 building and our curator David Somers decided to commission a site-specific piece.  Working with Wyn we covered the windows of the west end of the gallery, facing main-street, with a translucent material that could be rear projected through.

Wyn’s work can be described as whimsical and this piece “More than Meets the Eye” of looped close up of eyes is certainly in this category.  It asks us how we see the world and whether what we see is all there is.

Brampton, where PAMA is located, has a nighttime Santa Claus Parade every November.  It was a magical marvel to see the parade slow down as it passed the gallery so the volunteers could view the eyes.  Even Santa was impressed. CS 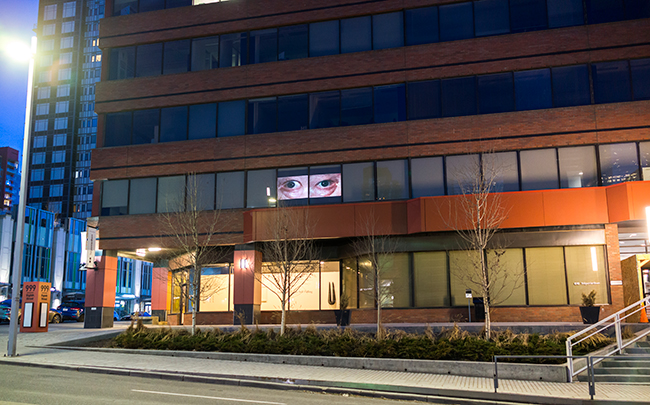 “An Imaginary Situation With Truthful Behavior”  * 1988

This work was commissioned for the 1988 Olympics exhibition, On Track, which was curated by Bruce Ferguson. When I agreed to participate I did not have a clear idea of what I would be proposing. Only when I was in Calgary scouting the Nova Building Atrium location did the idea for the work present itself. I found that the area of interest for me turned out to be the employee entrance which consisted of an external/internal glass walkway to the elevator, bisected by the glass entry doors. I had recently lost my father and had been thinking about him and his life on and off since his death. Upon seeing the walkway, and knowing that the workers would use it at least twice a day coming to and from their jobs, I had a captive audience.
In memory of my father and his life of manual labour, I decided to construct nine glass houses, three of which were placed outside the building in a row parallel to the path the employees would take. The other six continued the row inside the building. On the first day of the exhibition, I projected a black and white image onto a sheet of ground glass in the first house outside the building, of a naked man frantically scratching on the inside wall facing the inside of the building.
After three days, that wall was broken through, as well as the wall into the second house. The figure would then appear in that house, scratching away as before. This progression through the houses continued every three days, creating a tunnel and a trail of broken glass until the exhibition closed, leaving the figure scratching on the last house, never having escaped his endless labour.

* The title was purloined from a Tom Waits interview that described the circumstance he was in as “An imaginary situation with truthful behavior”. 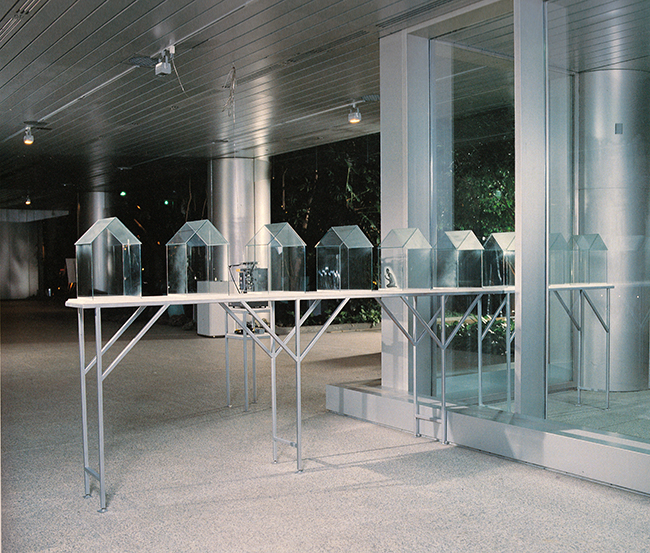 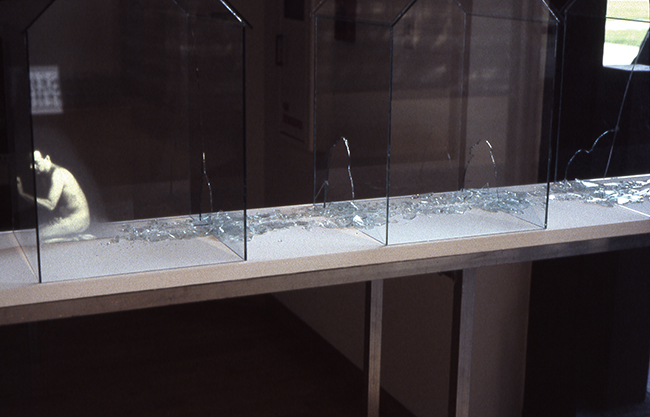 In 1995 I found a very big book, circa 1960’s, of home interior décor samples put out by the Sherwin Williams Paint Company (their logo is a can of paint being poured over a globe of the world with the slogan: Cover The Earth). The book covered a series of samples of every room in an average house. What attracted me to the book was the fact that one photo of a bathroom was exactly what my parents had added to our small bungalow in the east end of town, right down to plastic wall tiles, sink, floor, and turquoise wall paint.
During high school I had a very close friend named Mike. Whenever I would visit him I was never allowed to enter his house and go to his room to hang out until the master bedroom door was closed! Needless to say, I became very curious and to this day never could understand why they did that. In the sample book was an image of a bedroom, which for some reason brought back this odd memory. At the same time I came across a strip of 16mm film of a mother and father making kissy-face to an infant in a cradle.
This is a case where a work built itself very quickly. And, thankfully, though still curious, I am no longer haunted by the memory of that closed door. 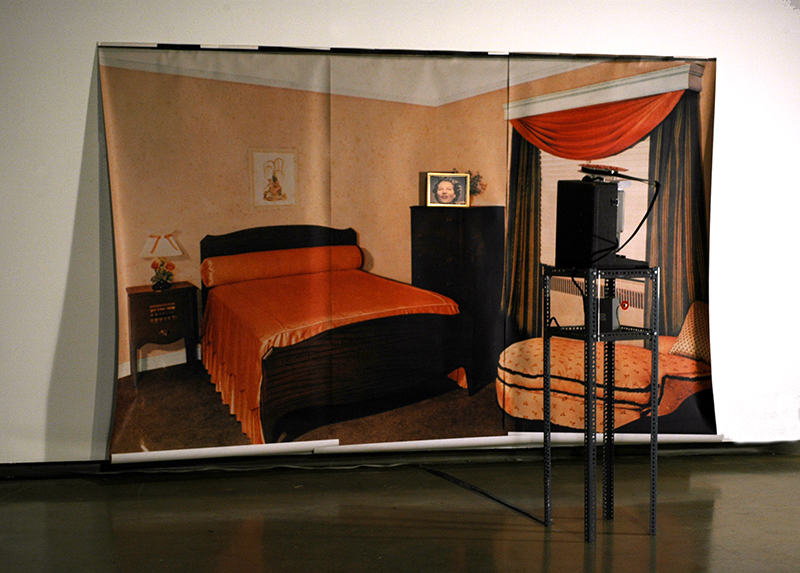 Also in the Sherwin-Williams sample book, I came upon an image of a French Provincial style dresser with make-up mirror in what I assumed was a bedroom, based on what was reflected in the mirror. I had a 16mm film I had shot in France of a male figure cowering in a corner that I had tried to use in a previous, unrealized project. The minute I projected the film onto the mirror I jokingly thought that perhaps this figure was what my friend Mike might have become after living in the house with the mysterious bedroom. 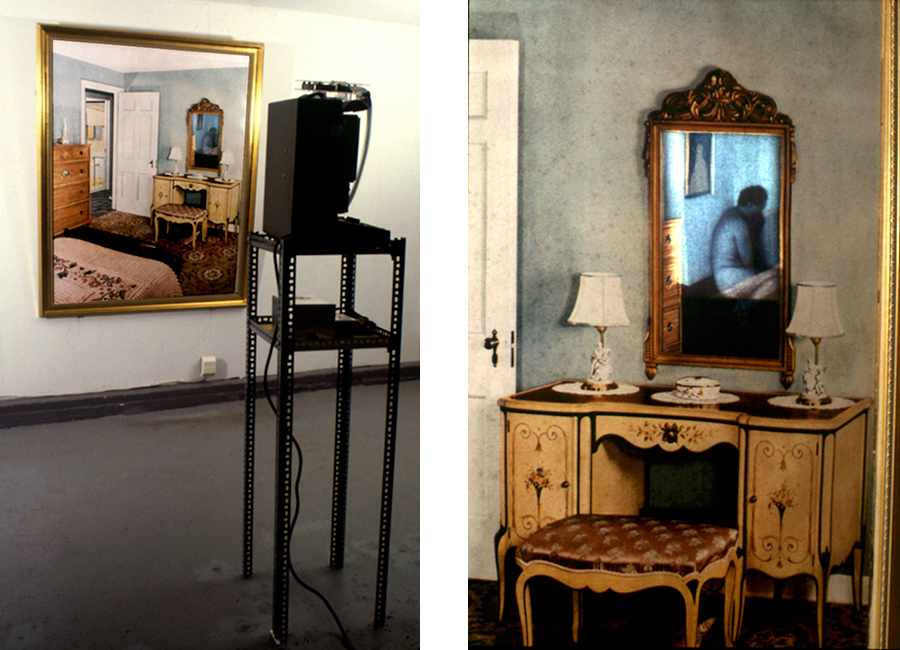 This work, I now believe, was born from my 40-year relationship with academia. Having a high school art program diploma did not prepare me for the critical dialogue I encountered when I first started working there. Over time I found myself absorbing many of the subjects being taught, however I struggled to articulate my position on the developing topics and issues within feminism, critical theory, and the general transition to a linguistic turn in the visual arts community. Unconsciously, at the time of it’s making, Just… was an expression of my frustration with this struggle. Though born out of my experience it was not explicitly about me; rather it was about the general struggle we all found ourselves in at the time.

How Commercial Galleries are Weathering the Pandemic
(Plan B) The South Window Project - Wyn Geleynse: More Than Meets the Eye
EXPOSURE 2020 Wyn Geleynse Danny Singer
Everywhere We Are at Nickle Galleries
WINTER 2020 Newsletter